Cat Ba is the largest of the 367 islands spanning 260 km2 (100 sq mi) that comprise the Cat Ba Archipelago, which makes up the southeastern edge of Ha Long Bay in NorthernVietnam. Cat Ba island has a surface area of 285 km2 (110 sq mi) and maintains the dramatic and rugged features of Ha Long Bay. It is commonly used as an overnight hotel stop on tours to Ha Long Bay run by travel agents from Hanoi. This island belongs to Haiphong city - the most famous city of industry in Vietnam.

Cat Ba is the largest island in the Bay and approximately half of its area is covered by a National Park, which is home to the highly endangered Cat Ba langur. The island has a wide variety of natural ecosystems, both marine and terrestrial, leading to incredibly high rates of biodiversity. Types of natural habitats found on Cat Ba Archipelago include limestone karsts, tropical limestone forests, coral reefs, mangrove and sea grass beds, lagoons, beaches, caves, and willow swamp forests. Cat Ba Island is one of the only populated islands in Ha Long Bay, with roughly 13,000 inhabitants living in six different communes, and 4,000 more inhabitants living on floating fishing villages off the coast. The large majority of the population can be found in Cat Ba town, which is located at the southern tip of the Island (15 km (9 mi) south of the national park) and is the commercial center on the Island. Since 1997, Cat Ba town has grown rapidly and has become a tourist hub for both the Island and greater Ha Long Bay. Especially, almost all surface of this island is deployed free wifi access points as well as 3.75 generation mobile networks, which can make visitors can easily work when traveling.

Cat Ba Island means "Women’s Island" (Cat meaning sandy and Ba meaning women). Legend has it that many centuries ago, three women of the Tran Dynasty were killed and their bodies floated all the way to Cat Ba Island. Each body washed up on a different beach and all three were found by local fishermen. The residents of Cat Ba built a temple for each woman, and the Island soon became known as Cat Ba. Archeological evidence suggests that people have lived on Cat Ba Island for almost 6,000 years, with the earliest settlements being found on the southeastern tip of the Island close to the area where Ban Beo harbor sits today. In 1938, a group of French archeologists discovered human remains belonging "to the Cai Beo people of the Ha Long culture, which lived between 4,000 and 6,500 years ago… considered to be perhaps the first population group occupying the North-Eastern territorial waters of Vietnam… [and] the Cai Beo people may be an intermediary link between the population strata at the end of the Neolithic Age, some 4,000 years ago".

In more recent history, Cat Ba Island was inhabited mostly by Viet-Chinese fisherman and was largely influenced by both the French and American wars. The Island was a strategic look-out point and bombing during the wars often forced local residents to hide among the Island's many caves. Today, the best reminders of the two wars have been turned into tourist attractions. Hospital Cave, which was a secret, bomb-proof hospital during the American War and as a safe house for VC leaders. This three-story feat of engineering was in use until 1975 is only 10 km north of Cat Ba town. The second attraction, the newly built Cannon Fort, sits on a peak 177 meters high, offering visitors a chance to see old bunkers and helicopter landing stations as well stunning views Cat Ba Island, its coast, and the limestone karsts in Lan Ha Bay offshore.

Three beaches are located near the harbour town -- hardly world class, but they'll do for a quick swim and some baking on the sand. The national park is a good place for a close-to-nature trek among the mangroves and freshwater lakes and it's a good launching point for tours of Ha Long Bay and kayaking trips.

You can also explore Hospital Cave on the main island, which played its part in the war with America, enjoy the views from Cannon Fort or just cruise the island on a motorbike. A 100 kilometre circuit runs along the bay and into the interior, through incredibly beautiful countryside, and small villages.

How To Get There

Cat Ba Island is 45km east of Haiphong and 20km south of Halong City. Be aware that there are several piers on Cat Ba Island. Most handy is the jetty directly in front of Cat Ba town from where the hydrofoils to Haiphong depart. A second popular one is at Ben Beo, about 2km from Cat Ba town where most of the tourist boats berth. The other pier is at Phu Long, 30km from Cat Ba, where boats from Cat Hai arrive. At Phu Long, motorbike drivers wait to whisk passengers from the ferries to town (or the 15km to Cat Ba National Park) for about 50, 000d. There is also a public bus that meets the boats, but this takes longer to get across the island.
The best option for independent travellers is the hydrofoils linking Cat Ba directly to Haiphong. These air-con rockets reduce the journey to just 45 minutes. There are several companies running the route, with three departures a day in the high summer season and just once a day the rest of the year. Summer season services depart between 10am and 5pm. Transtour (888 314) runs the Mekong Express (100, 000d, 2.45pm departure), which is the safest and most comfortable option. Tahaco (031-374 7055) has smaller hydrofoils, which are cheaper at 70, 000d and depart at 3.15pm. There are no longer hydrofoils operating to Halong City.
The easiest way to get from Halong City to Cat Ba is to hop on the tourist boats (100, 000d, five hours) that leave several times a day. This is less organised going in the other direction to Halong City, but your guesthouse or hotel should be able to hook you up with a boat going that way.
There are also plenty of slow, chartered tourist boats making the run from Halong City to Cat Ba Island; check with the cafés and travel agencies in Hanoi about tour options. Such trips generally include all transport, accommodation, food and a guide, but double check to be sure.
An alternative way to reach Cat Ba town is via the island of Cat Hai, which is closer to Haiphong. A boat departs Haiphong and makes a brief stop in Cat Hai on the way to the port of Phu Long on Cat Ba Island. It is also possible to drive a motorbike or car to Haiphong, from where you can get the ferry to Cat Hai, then drive 15 minutes across the island to a pier from where you take a ferry to Phu Long. This accounts for all those surreal traffic jams during the summer season. A bridge is under construction to Cat Hai which will make Cat Ba even easier to reach by vehicle.
There are also direct buses from Hanoi to Cat Ba town. Hoang Long bus operates four services daily to Cat Ba (120, 000d, four hours) from the Luong Yen bus station. However, it is just as easy to use the bus-hydrofoil combination via Haiphong.

Practically every place to stay in Cat Ba is located along the harbour road (1-4 Street).There aren't many places to stay other than town, but a couple of options are located on the nearby beaches and Catong  Island which is called eco-resort is found.You should try the Island with private instead a hotel in Catba town. 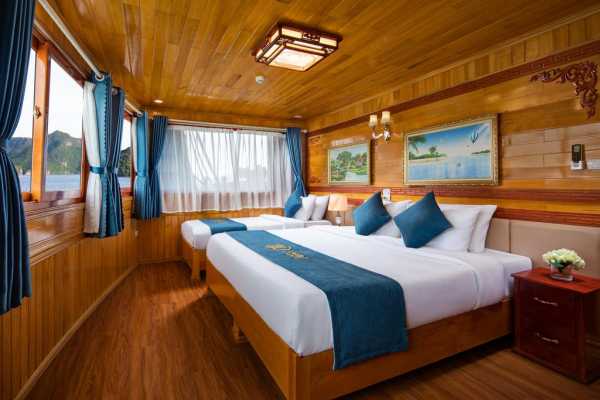 From USD 330
Book Now!
© 2020 OCEAN TOURS. All rights reserved. Terms of Use. Powered by TrekkSoft, the online booking solution company.